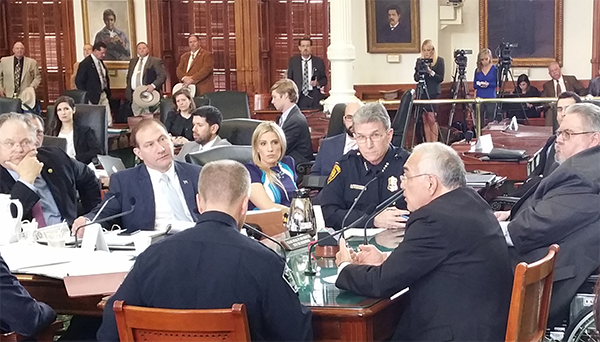 My name is Bishop Joe Vásquez of the Diocese of Austin. I am testifying today on behalf of the Texas Catholic Conference of Bishops.  We are opposed to Senate Bill 4.

The Catholic Church has a long history of involvement in the immigration issue. Our experience in working with immigrants throughout the years compels us to speak out on the issue of immigration reform, which is a moral issue that impacts human rights.

We are very concerned that if SB 4 is enacted, in its present form, several detrimental effects will likely follow.

First, it will have a chilling effect on communications between immigrants—both documented and undocumented—and law enforcement.

Second, the bill will impose an additional undue burden upon our local peace officers.  State and local police are already overburdened.  In its present form, SB 4 will effectively divert police officers to work for the federal government by requiring them to enforce immigration laws.

Third, local citizens will end up suffering the negative fiscal impact that SB 4 may impose upon them. The revocation of State funds in cities whose leaders decide not to comply with S.B. 4 will hurt local citizens who benefit from such funding, such as families who rely upon housing aid.

Fourth, federal law will be further interwoven into state and local law, which will blur the separation of duties between Texas and federal officials, and will have far-reaching consequences for issues beyond immigration.

Immigration law should be enforced in a way that is targeted, proportional, and humane. Immigrants who travel to Texas for work or to flee abuse are not a threat to our safety.  Federal agents should focus upon those who truly threaten public safety: cartel members, human traffickers, smugglers, and terrorists.

In your lives, each of you has responded to God’s call to serve his people. We answer this same call as we work with immigrants, who show us the face of Christ.  We admire the courage of our forefathers who themselves were migrants; we admire too the courage of migrants today, who leave the poverty of their homeland to forge a new and better life in Texas. It is precisely in this way that we manifest both the compassion of Christ and our venerable Texas heritage.