The Church’s advocacy efforts often extend beyond the legislature to the judiciary where we support or oppose challenges to law. When bad laws need to be challenged in the courts and good laws are attacked, we must continue to speak prophetic truth to the courts as we do to the legislature. Sometimes this takes the form of filing a lawsuit to challenge a law or administrative rule, and other times it takes the form of filing an amicus brief, which is engaging to express a legal opinion on the validity of the law as a “friend of the court.” The U.S. Supreme Court ends their annual term on June 30 every year, which is why June is always a busy month for rulings from the Court.

As we close Religious Freedom Week, we want to highlight several important decisions of the Court in cases in which the bishops filed amicus briefs relating to religious liberty, immigration, sex discrimination in the workplace, the death penalty, and abortion.

In support of death row inmate Ruben Gutierrez’s request for a stay of execution, the TCCB issued an amicus brief which reiterates the Catholic Church’s opposition to capital punishment, while focusing on the protection of Mr. Gutierrez’s religious liberty. We argued that the policy banning the historic practice of spiritual advisers from accompanying the condemned into the execution chamber is a violation of the First Amendment. We are gratified that the U.S. Supreme Court halted his execution on June 16. While this death penalty case was a win, the court declined to hear a challenge to the reinstatement of the federal death penalty which allows this barbaric practice to resume at the federal level.

In the 1800s most states, including Texas, passed amendments to their constitutions based on the anti-Catholic bigotry of Senator Blaine. Today, the U.S. Supreme Court struck down the Montana Blaine amendment paving the way to end over a century of religious discrimination in education funding. The USCCB (United States Conference of Catholic Bishops) stated in response: “The Court has rightly ruled that the U.S. Constitution does not permit states to discriminate against religion.”

We are also extremely gratified that the Supreme Court has upheld DACA (Deferred Action for Childhood Arrivals). The USCCB submitted an amicus brief arguing that rescinding the program would irreparably harm hundreds of thousands of families, and thereby violates the Administrative Procedure Act. We continue to advocate for a pathway to citizenship for DACA recipients so that they may escape the limbo of “deferred action.”

The USCCB also, along with several other religious organizations, issued amicus briefs in several cases regarding sex discrimination in the workplace. The amici urged the Court to maintain that “sex” as used in Title VII of the Civil Rights Act of 1964 does not include “sexual orientation” and "gender identity" and that reinterpreting the meaning would have serious implications for the Church’s ability to fulfill her mission. Unfortunately, SCOTUS ruled in favor of broadening the definition. In response to the Court's decision, USCCB President Archbishop Gomez stated, “Every human person is made in the image and likeness of God and, without exception, must be treated with dignity, compassion, and respect. Protecting our neighbors from unjust discrimination does not require redefining human nature.”

Finally, in another disappointing ruling, SCOTUS struck down Louisiana’s abortion law requiring abortion providers to obtain admitting privileges at nearby hospitals. USCCB, the Louisiana Conference of Catholic Bishops, and the National Association of Evangelicals submitted an amicus brief in support of the law “to safeguard the health and safety of women who need to be hospitalized because of injuries resulting from an abortion.” The Court overturned a similar law in Texas four years ago and used that decision as the basis for the current ruling. We echo the statement of Archbishop Naumann, USCCB Chairman of the Committee on Pro-Life Activities: “As we grieve this decision and the pregnant women who will be harmed by it, we continue to pray and fight for justice for mothers and children.”

Regarding the decisions of the U.S. Supreme Court on the federal death penalty and abortion, Bishop Seitz of the Diocese of El Paso said in a statement today, "We must resist the throwaway culture that marginalizes, depreciates, silences, and discards the vulnerable. From our migrant families in immigrant detention to the child entrusted by the hands of angels to new mothers, to those brutalized by the ugly practices of racism, to our forgotten parents and grandparents in nursing homes -- let us never give up on life."

While not all the recent news may be encouraging, we cannot despair. As people of faith, we place our trust in the loving providence of God and remain hopeful in the midst of pandemics, racial tensions, and, yes, even unfavorable court decisions. The Texas bishops and the TCCB staff assure you of our continued advocacy to promote life, charity, and justice for all. 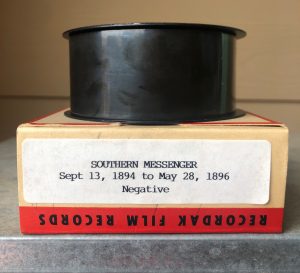 Preserving history is an ongoing effort. As items decay, archivists must produce creative solutions to prevent total loss. Microfilm, once used to photograph large amounts of files to reduce storage space and as an early file-sharing method, decays faster than originally anticipated. Acetate film, also known as Safety Film, used for microfilm, 8mm home movies, photographs, etc. will eventually buckle, shrink, and become brittle in a progression known as “Vinegar Syndrome” due to the smell associated with this irreversible process. The earliest microfilmed Catholic newspaper at the Catholic Archives of Texas, the Southern Messenger, has begun to exhibit signs of Vinegar Syndrome and will be digitized by the archivist as an ongoing project. The digital files will be made available to onsite researchers and shared with the Archdiocese of San Antonio.

Religious freedom under stress around the world

Pope Francis names Msgr. David L. Toups as the sixth bishop for the Diocese of Beaumont

Our Families
We pray that today's families may be accompanied with love, respect and guidance.