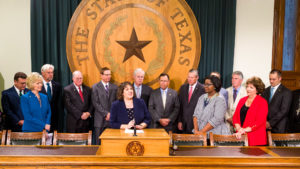 "The Texas Catholic Conference of Bishops is pleased to support this package of pro-life bills that provides incremental progress to reduce abortion in Texas," Bishop Daniel Garcia of Austin said in opening the media conference on April 18.

“We are thrilled a wide range of pro-life bills has been filed this session to better protect the life and dignity of the human person,” said Jennifer Carr Allmon, executive director of the Texas Conference of Catholic Bishops. “While we maintain the goal of ending abortion in the United States, this bill package makes strategic and incremental progress toward that goal.”

The bills protect women and girls from forced abortions, stop state and local governments from contracting with abortion providers, improve the reporting of abortion complications, change the category of ectopic pregnancies and enforce the humane treatment of the bodies of unborn babies.

"The health and flourishing of all people, especially the most vulnerable among us is important and those of us in this coalition are committed to creating a pro-life culture in Texas,” said Kathryn Freeman, director of Public Policy for the Christian Life Commission. “We are thrilled to support a wide range of bills, which will have a real impact in protecting women and children.”

“We applaud the House for moving these pro-life bills, all of which are well crafted to survive court challenges,” said Dr. Joe Pojman, executive director of the Texas Alliance for Life.

While the bills are being presented this week in the House for committee action, almost all have accompanying Senate bills, suggesting bicameral support. “We are excited to see members of both chambers moving our priority bills, demonstrating their strong commitment to honor and protect life,” said Kyleen Wright, director of Texans for Life.

The pro-life groups also commended the fact that Governor Greg Abbott’s priority for abortion alternatives was fully funded by the House budget.

The package of pro-life bills, including their authors, supported by the four organizations are as follows:

Humane treatment of bodies of unborn babies (HB 200 and HB 35/SB 8) by Reps. Cindy Burkett and Byron Cook and Senator Charles Schwertner -- Ban the sale or donation of tissues and organs after an abortion; ban research on tissues and organs of victims of elective abortion by public and private institutions; codify DSHS-like rules for disposition of the remains of victims of elective abortion.

The Texas Baptist Christian Life Commission is the ethics and justice ministry of the Baptist General Convention of Texas.

Texans for Life Coalition is one of the state’s largest and oldest non-profit organizations dedicated to ending abortion through education and legislative advocacy.